Today I packed a lot of things in. At work I was teaching most of the day without any teaching assistant. Then I had to stay late and do admin – finally claiming some money I’m owed (I hate filling out the forms) and working on some plans for school. Still more to do with both of those things.

Yesterday when I wrote my post I was thinking that today I’d be going bath shopping. I also was aiming to go to crossfit. However, when I got to CrossFit they wouldn’t let me in and explained it was women’s night. I was kind of happy as I’d forced myself to go. As I was walking home I was thinking about the bathtubs and realised that by selecting the cheap ones with holes in the them they would probably break under the weight of all the wet soil we were going to put in them. Also they would not have that much space for the roots of the plants due to curvature of the baths.

I spoke to my friend and she agreed that they were not a good idea. It turned out she had actually been feeling somewhat against the idea and had a better plan. Using plastic sheeting directly on the rooftop. I didn’t really get the idea until she sent me this picture that she had found on the internet: 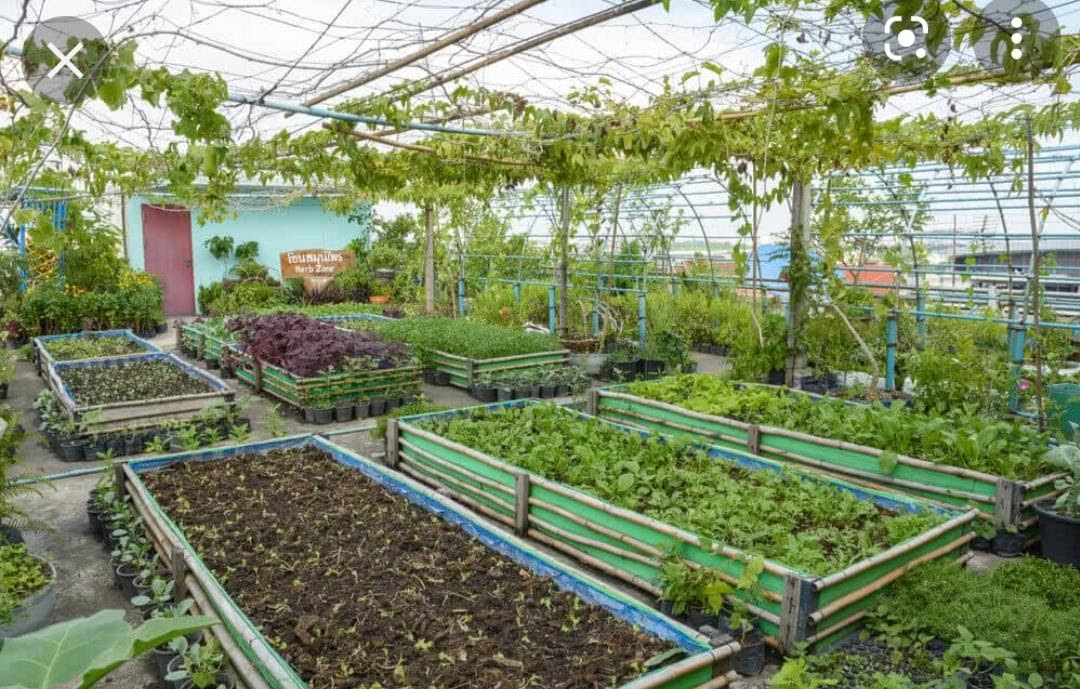 This looks so good and has way more growing space than bathtubs. I spoke to my other friend who had taken the bathtubs guys number and asked him to cancel our order. The plan was now to get plastic sheeting (ideally second hand) and create a frame out of whatever materials we could find.

So anyway that was yesterday after I walked back from my failed exercise attempt… today, however, the plan of buying the stuff had to be postponed because the area we were going to had power cuts and therefore the traders were heading home early. Lucky we found out about this before heading over there.

Instead we decided to get some indian food and chill: 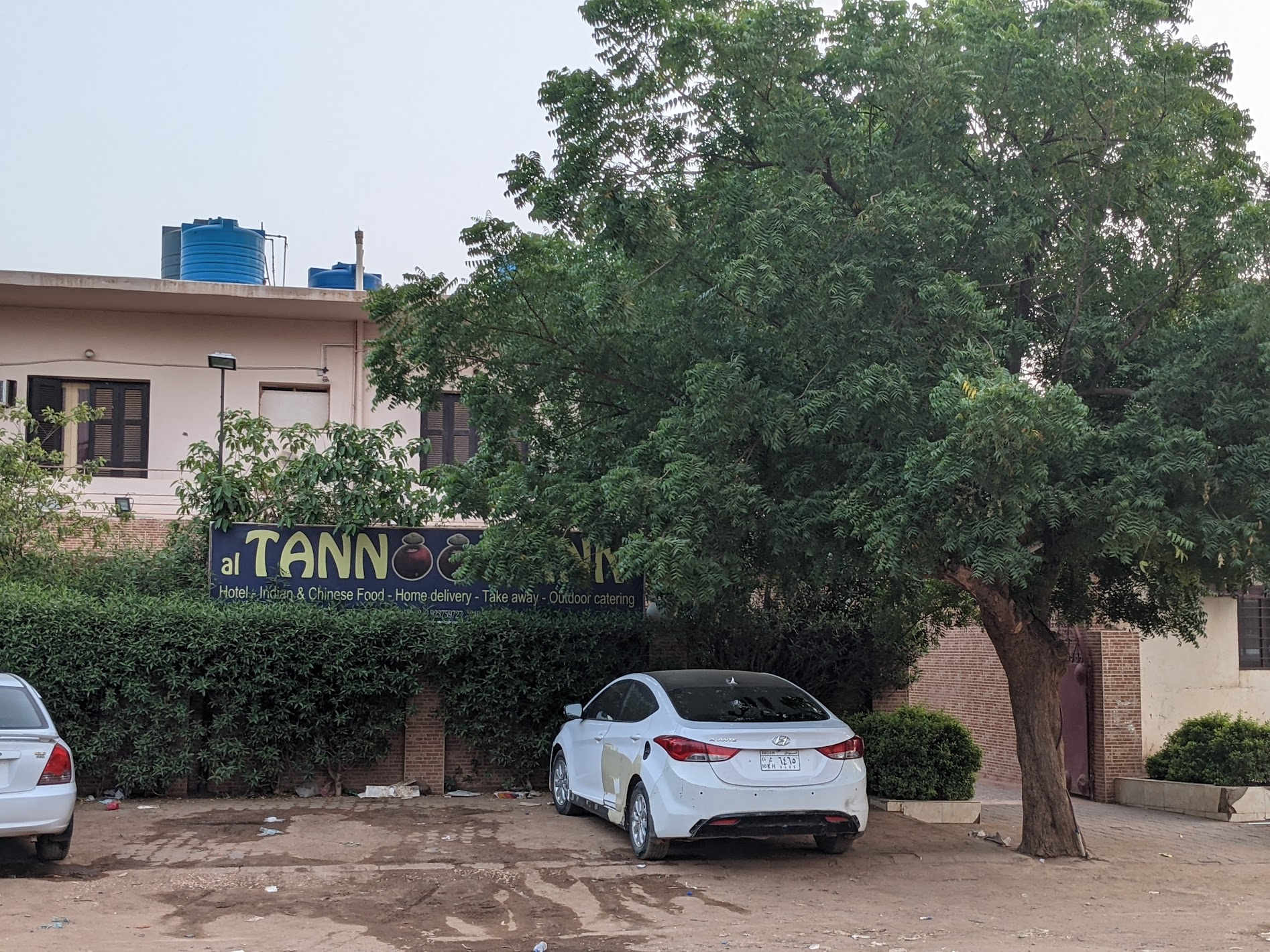 This is the place. I should have taken a photo of the food because it was great, daal, samosas, channa chaat, mushroom masala etc etc. Lots of nice vegan options. I go there a lot!

I was still thinking about plants so took some photos of all the greenery because I know a few people are reading this blog now and I think it’s nice to show off how green Khartoum actually is in places because people expect it to just all be dry and dusty… admittedly it can be that quite often too. Anyways here’s a few green pics from the day: 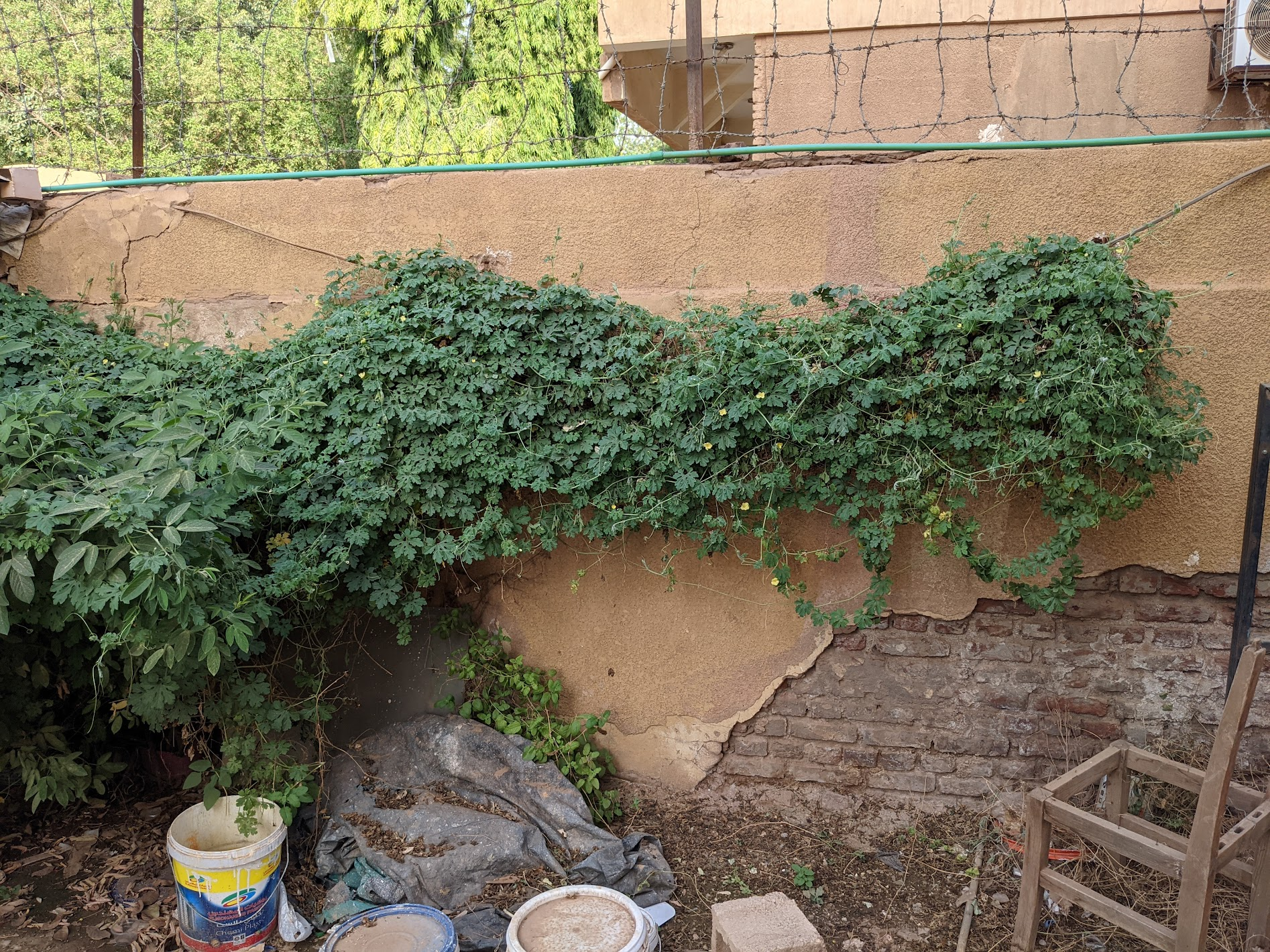 This was spotted as it shows the potential for wall climbing plants. 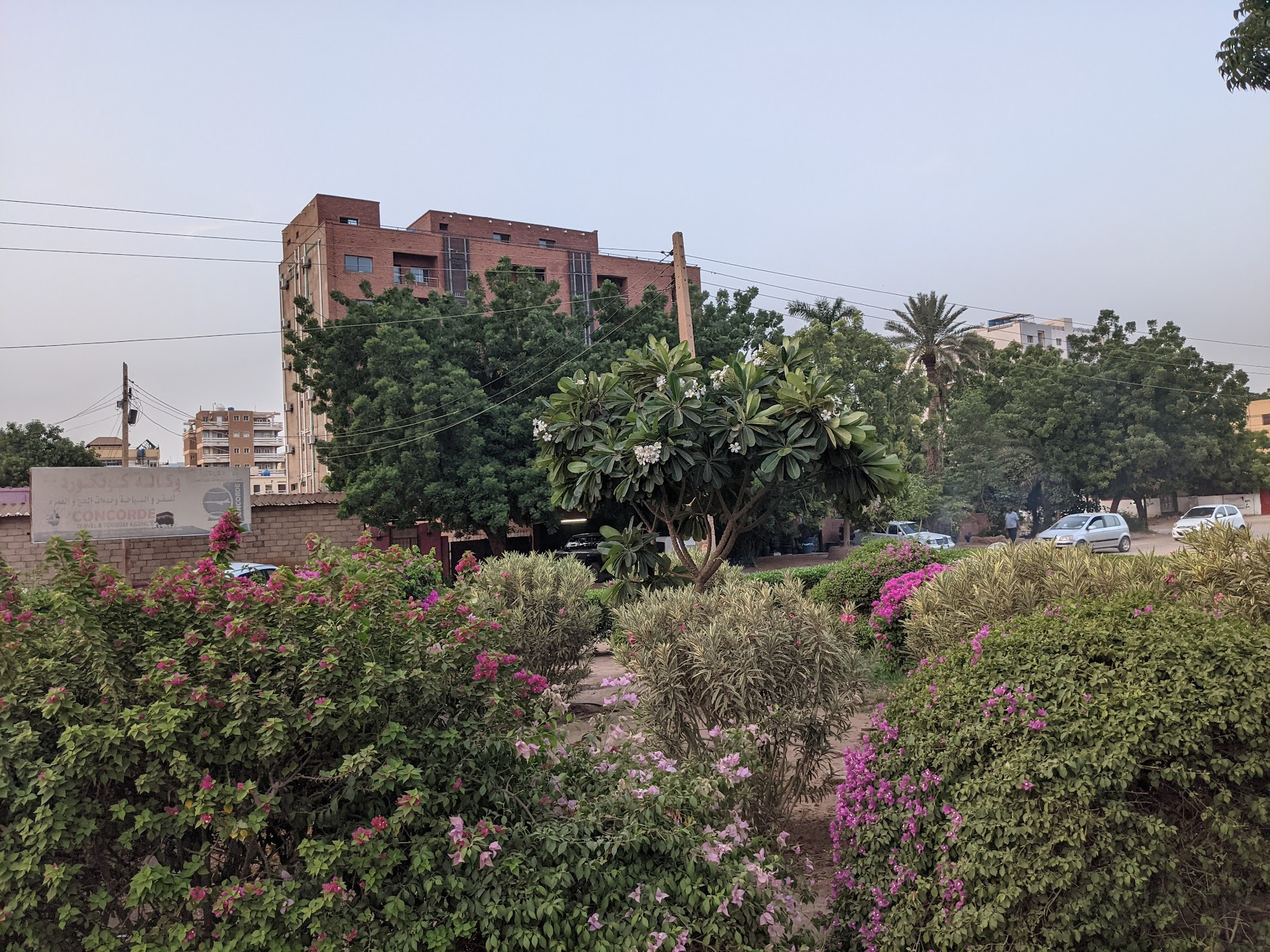 This is a mini garden opposite the restaurant. 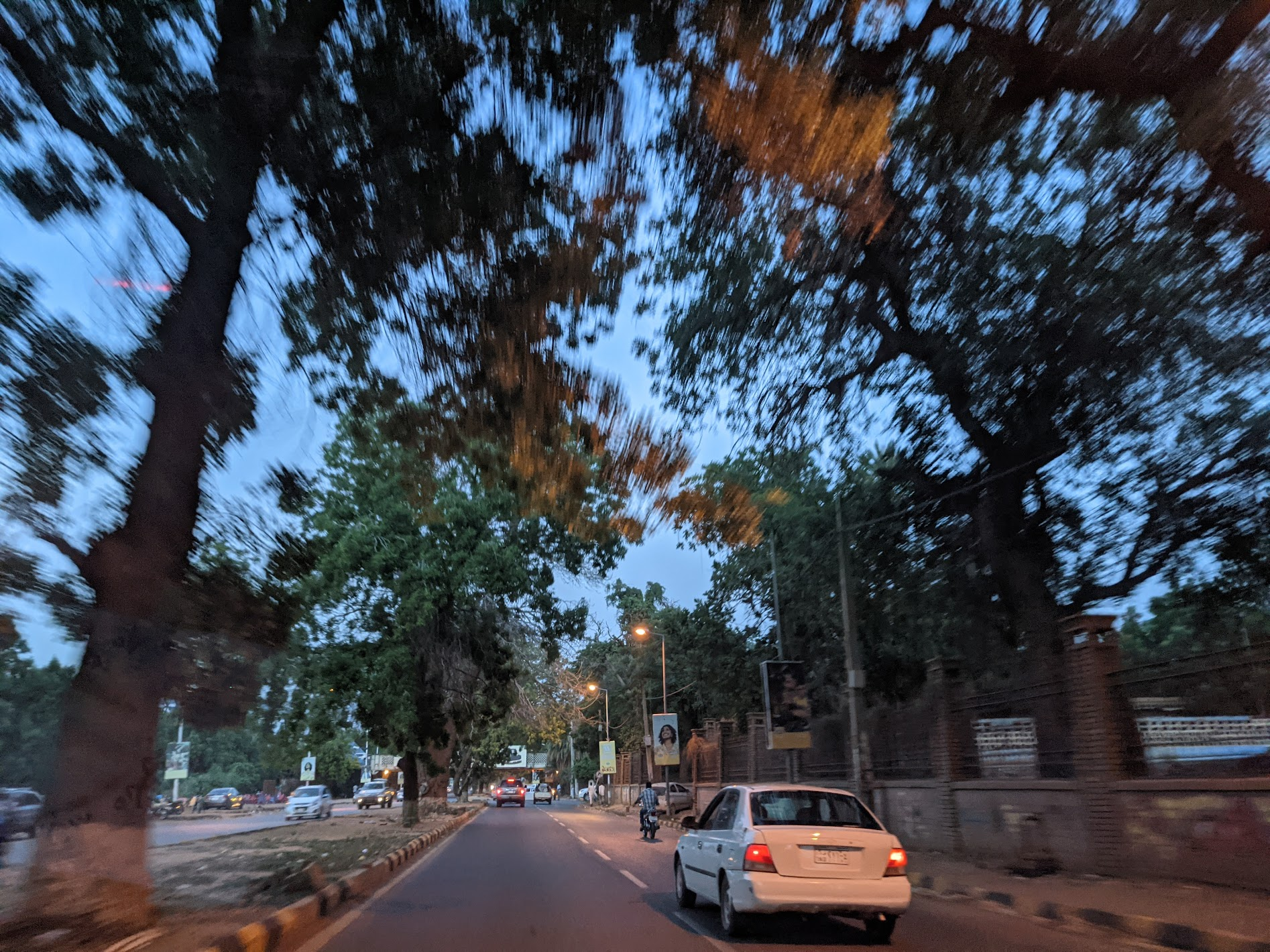 This is from the drive after our meal.

One great thing that happened at the meal is that my friend said he is up for doing Crossfit too. This is the same friend who is signing up for the platform cooperatives. For both these things it is going to help a lot to have someone to help keep me motivated. 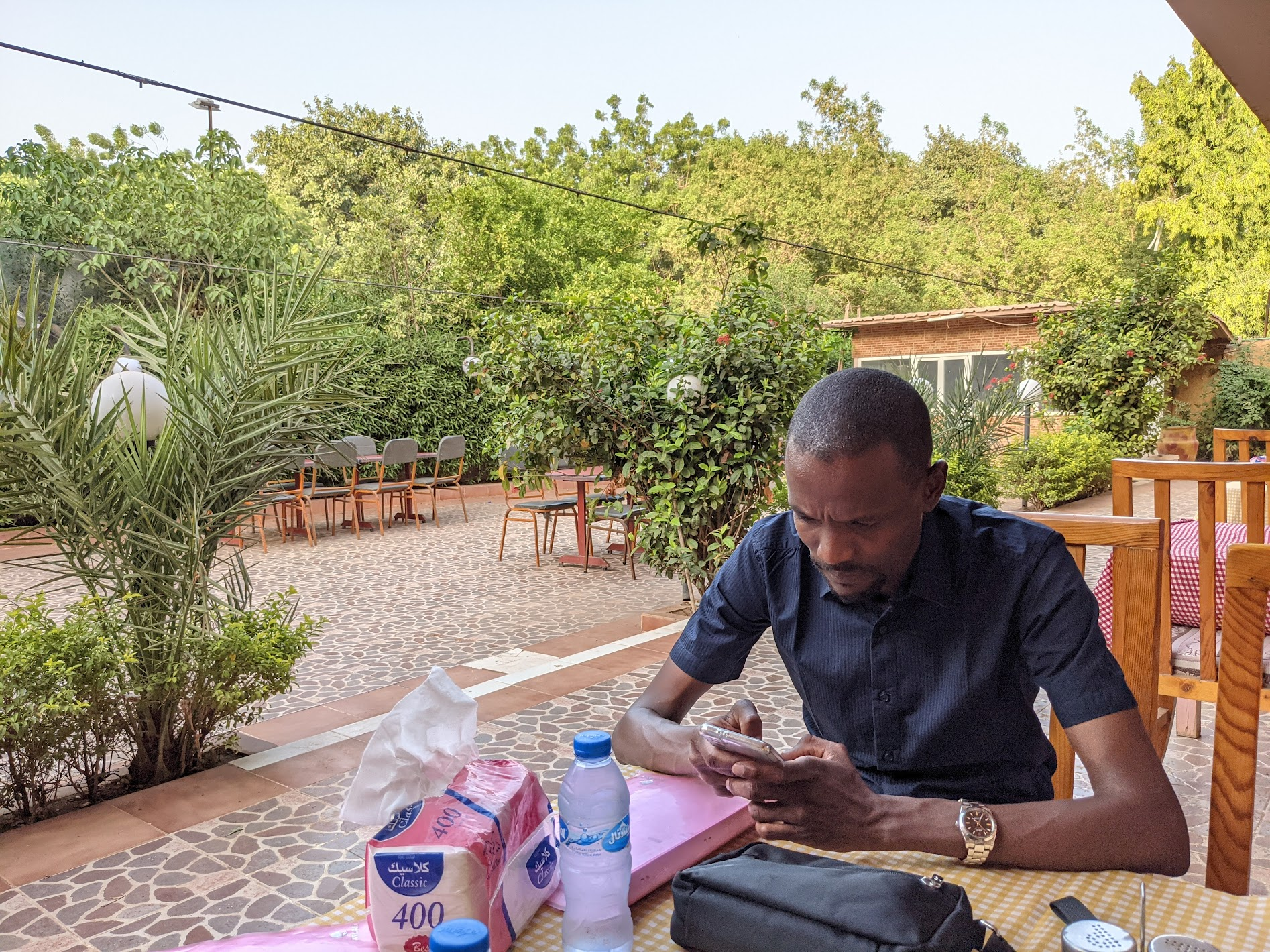 Beautiful greenery in the background.

Anyways, after eating we decided to go to the Nile because we’d been talking about an idea to create a boat guesthouse that could test out alternative ways of living in Sudan.

I’ve lived on a boat before and I would love to be able to go on weekend trips up the Nile with a few friends. We speculated that a lot of other people would like this opportunity too. Also there is potential to provide a lot of low cost housing on the river in the future if the government ever allows this kind of thing!

My usual hang out spot was flooded due to rainy season. Normally these boats are much further out and this area has terraces cut into the river bank that you can sit on: 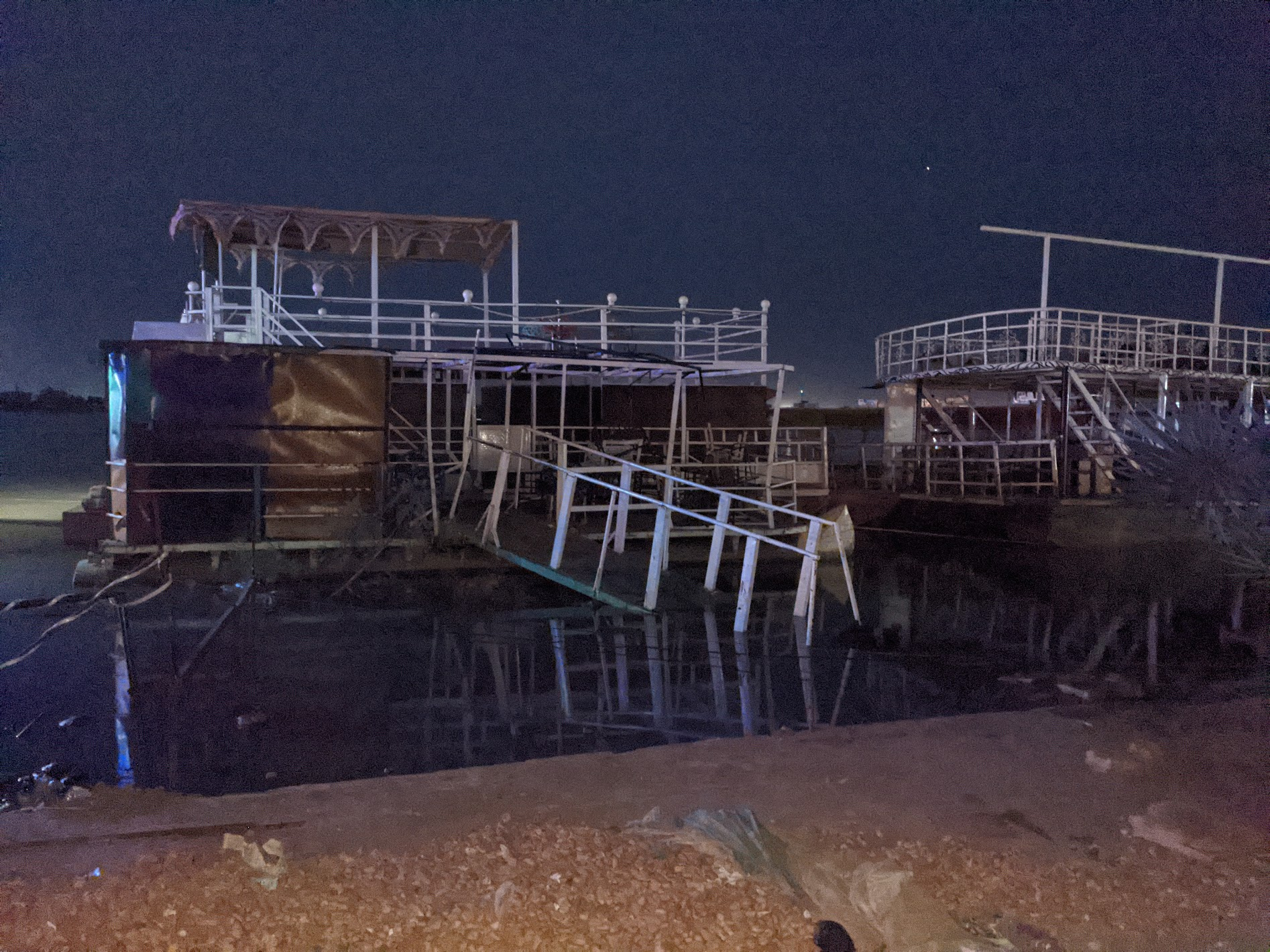 So we went to another boat nearby that is still open: 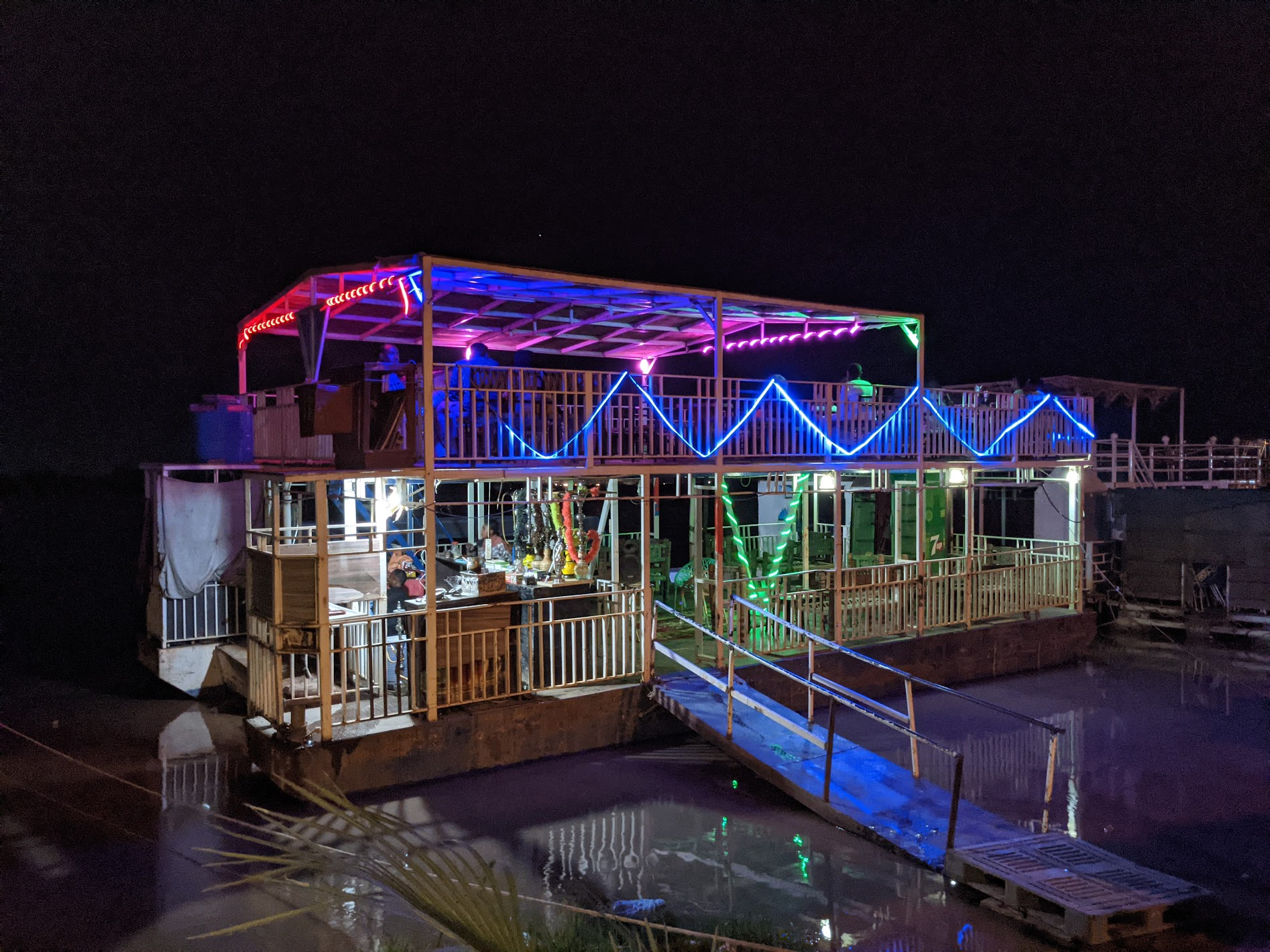 At first we were talking about getting a boat as big as this one and turning it into a guesthouse but quickly talked ourselves out of it when we thought about the cost.

Moored behind it, though, was a smaller boat that we started debating whether it would be appropriate whilst drinking our tea. We watched this video on silent whilst drinking the tea and stared getting into the idea of having a tiny boat guesthouse:

My cousin called and I explained what we were up to. “So you’re on a boat, looking at boats.” He summarised.

After we drank our tea we went downstairs and looked at the boat properly: 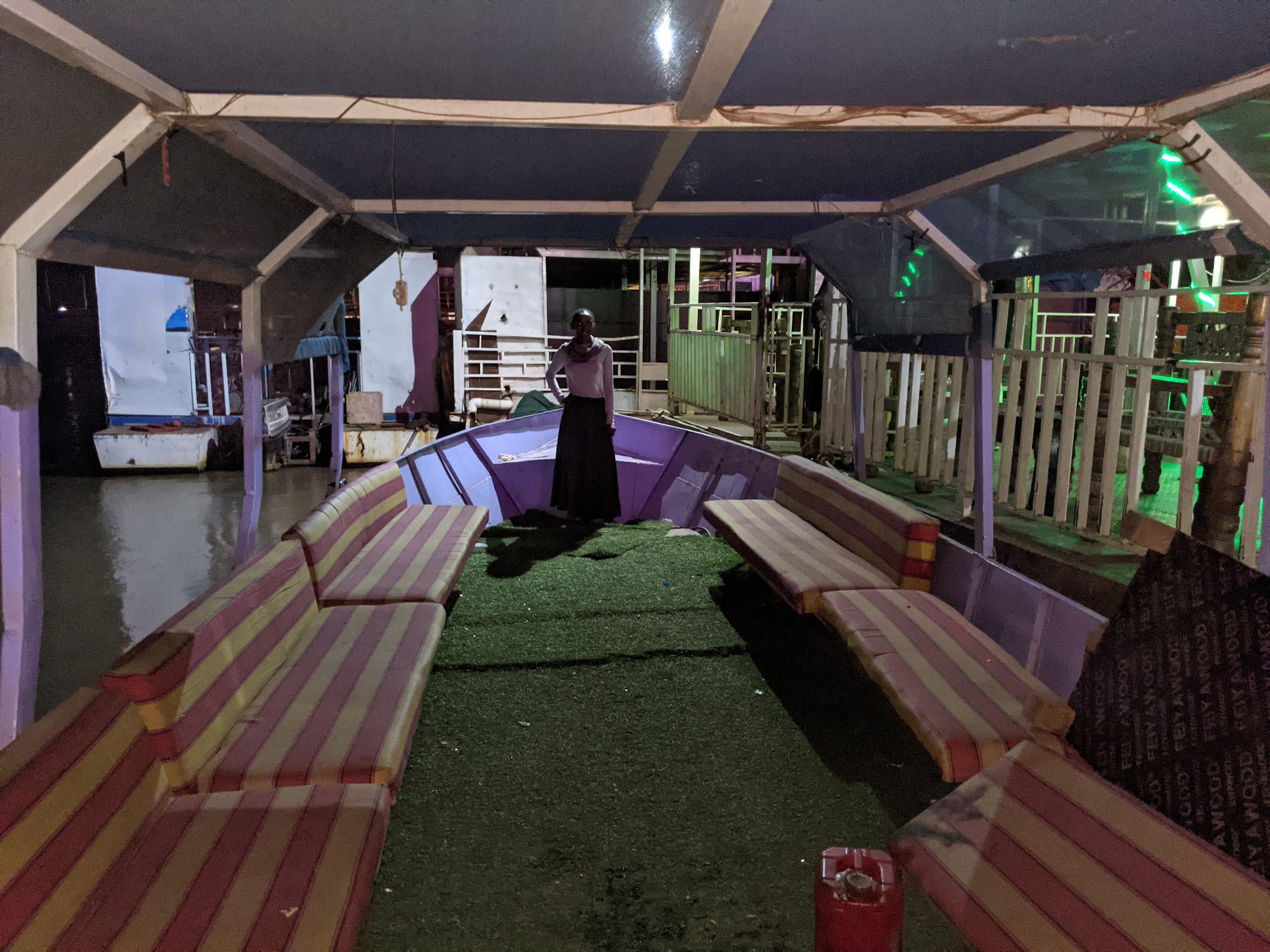 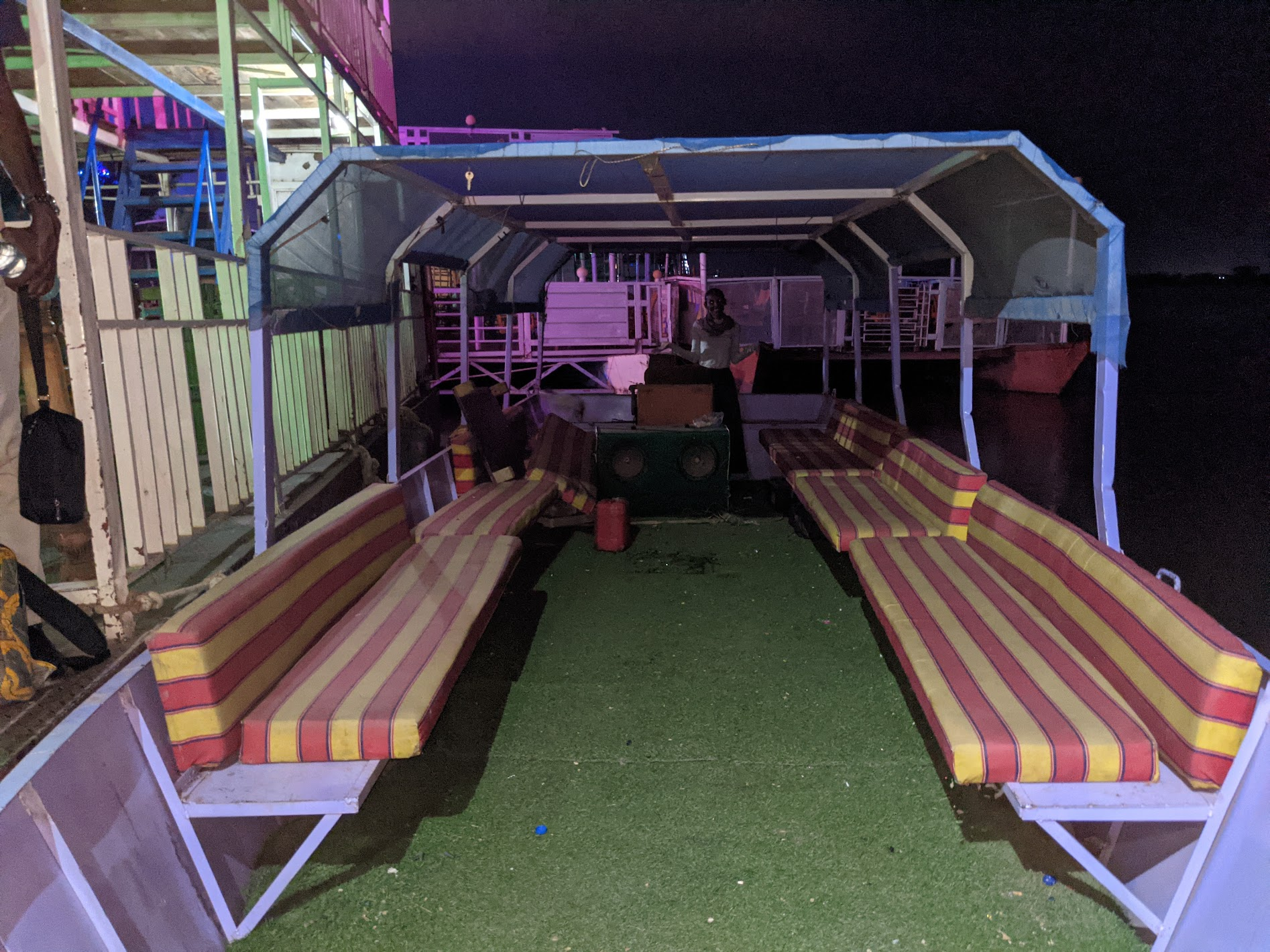 We got pretty into the idea of using a boat this size. So we chatted to owner and found out where it was made and roughly how much it would cost. A conservative estimate of $5,000 at the moment due to a lot of price increases recently. There was also the potential option to buy a boat secondhand from the sailing club which could be cheaper but maybe not quite what we’re looking for.

We would need to redesign the steering area if we wanted to close up the sides and make it like a guesthouse. The boat owner also advised us though that this is not allowed. The government require people to keep their boats open. We were briefly put off but then agreed that we should look into the regulations a bit first and see if there are any ways we can deal with them.

By this time it was getting close to crossfit time. After a few fails I really wanted to go this time. We rushed back, got ready and arrived only about 1 minute late.

Finally I got some exercise. It was sweating an insane amount. Half due to the exercise and half due the heat.

Tomorrow we’ll try and get the rooftop supplies. In the next few days we’ll also go to the boat club and continue our research on the possibilities regarding boats.